"Pfeiler" is an exhibition space in the Brückenpassage / MQ.

Every six months, a work by graduates of the Sculpture and Space Department is shown here.

Lower volume in higher frequencies, deep layered brown noise. Like a whole ocean, rumbling between 5 and 9 Hz. A frequency, lower than the limit of human hearing.

A “rough” present to the sleep deprived person. Relaxing and calming deep sleep aid. The downside: Earbuds prevent me from being a side sleeper. Gotta stay on my back at all times.

Typically, I prefer smoothed brown noise. It is not as rough. Mixes on streaming plattforms are between 6 and 12 hours long. Cancelling most noise, making sense of my existence. 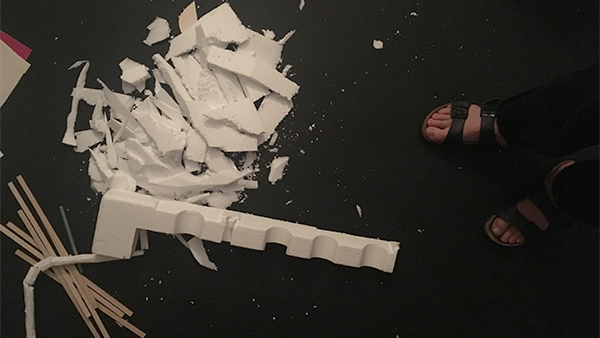 It is flat and called schiefer

I made you this kit for overcoming the past

The orderly Altbauwohnung and circumstances

This is an urgent wish to make a book of all the poems about toxic nostalgia, that hurt the make-great-agains.

For „Pfeiler“ the Vienna/Frankfurt based artist Eugen Wist (*1989, Sheregesh, Russia) developed a site specific situation. The window glass is blurred by a greenish substance and leaves just a peephole for the viewer to see a wall object, – a book with a screen print, a postcard with an image of one of Van Goghs flower paintings and a found stone. All of the materials are bound together by a rope holding in place the layered composition.

Timokleia was a citizen of Thebes, who in the Macedonian occupation around 335 BC. Chr. was raped by a soldier. Following this act of violence, she led the offender to a well, pushed him in and threw heavy stones at him until he died.

We face a figure who exposes herself and confronts us with the physical scope of a violent act. At the same time, we are facing an image that seeks the complexity of sculpture and the conditions of space in the balancing act with gravity. Acting in a limited space, the sculpture develops at times an almost relief-like character.

Many of the artist's sculptural arrangements are created by pouring, deforming and assembling individual body parts in garments. By polishing the surfaces, the fine interiors of the material are carried outwards. The resulting figures provoke different relationships between the individual and social perceptions of bodies.

To what extent does violence lead to a deformation of one's own and what does Timokleia’s act of self-justice means today?